lots to catch up on as usual (really need to start writing more often) - i’ve been working on some bigger and more varied projects and playing fewer shows. this has been pretty fulfilling as i’m starting to really get to a place where i can make things happen and i can express ideas that have been rattling round in my head for years. but it’s also been weird getting used to a different pace, especially with performances being more spread out it can be hard to see where the effort is going sometimes. but then having said that when i looked back over the last few months or so to write this blog i realised how much fun stuff i’ve got going on so i shouldn’t complain ha.

so a quick run down of heavy lifting activities apr-jul 2019:

me and laurie went to rotterdam to represent type at algo~rhythms, an amazing event organised by joana chicau (who is frankly a massive inspiration!!). we played at worm and did a little q&a - ryan and innocent joined us over the internet which was nice, they put their faces up on a massive screen which was quite funny. 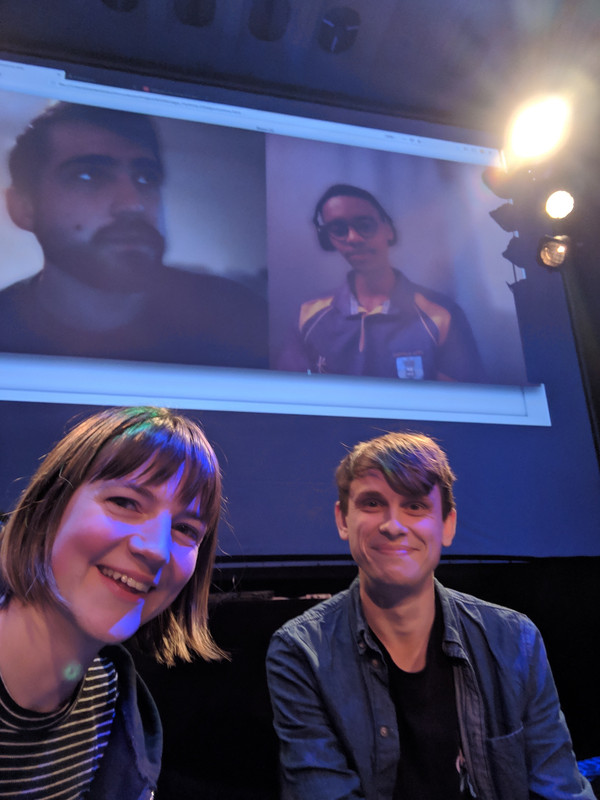 we absolutly loved rotterdam - it felt like there was so much happening in the city. we stayed at the worm house in wielewaal with wotjek who really looked after us and was a super host. we also ate dinner at the top of this fancy tower where we had a ‘surprise menu’ which was very delicious. we basically just biked round looking at cool stuff and talking to lovely people and eating great food. 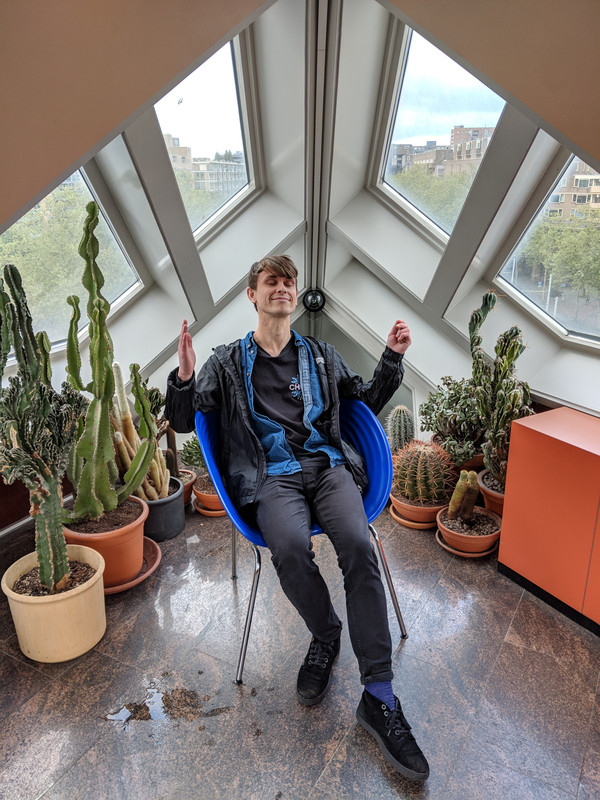 everyone we met was so kind, welcoming and cool - we <3 nl! thank you so much to joana for inviting us and to everyone we met for being so awesome, i hope we all get to play shows together soon!!!! 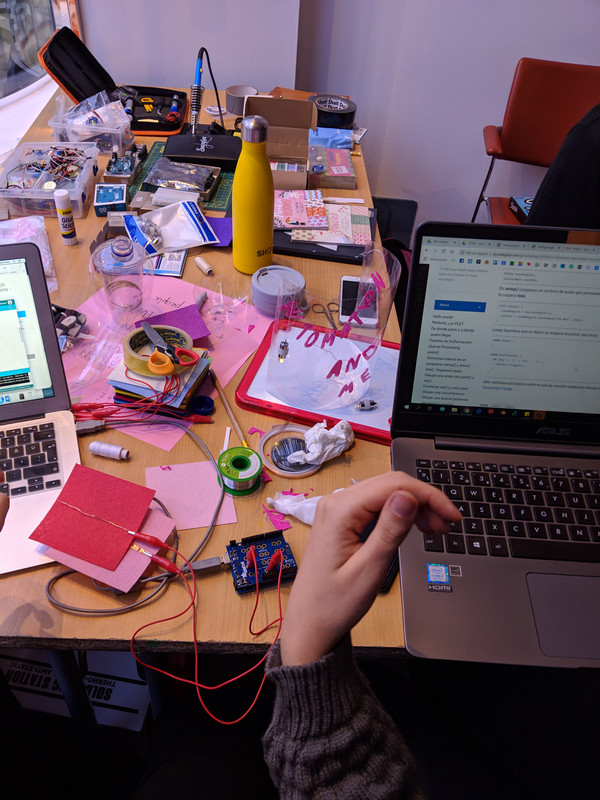 then in may i co-organised a feminist hackathon as part of leeds international festival alongside joanne armitage and lizzie wilson. we invited 20 womxn to come and take part in a 2-day hackathon on the theme of automation & bodies. the event was absolutely wonderful, just felt like pure magic to be surrounded by so many incredible female artists and makers, and i feel really proud of what we achieved. all the projects were so thought provoking, fun, clever & beautiful, and i’m so thankful to everyone who took part for totally going for it.

was also really lovely to be able to host chiho over from japan and to get to know her a bit better too. 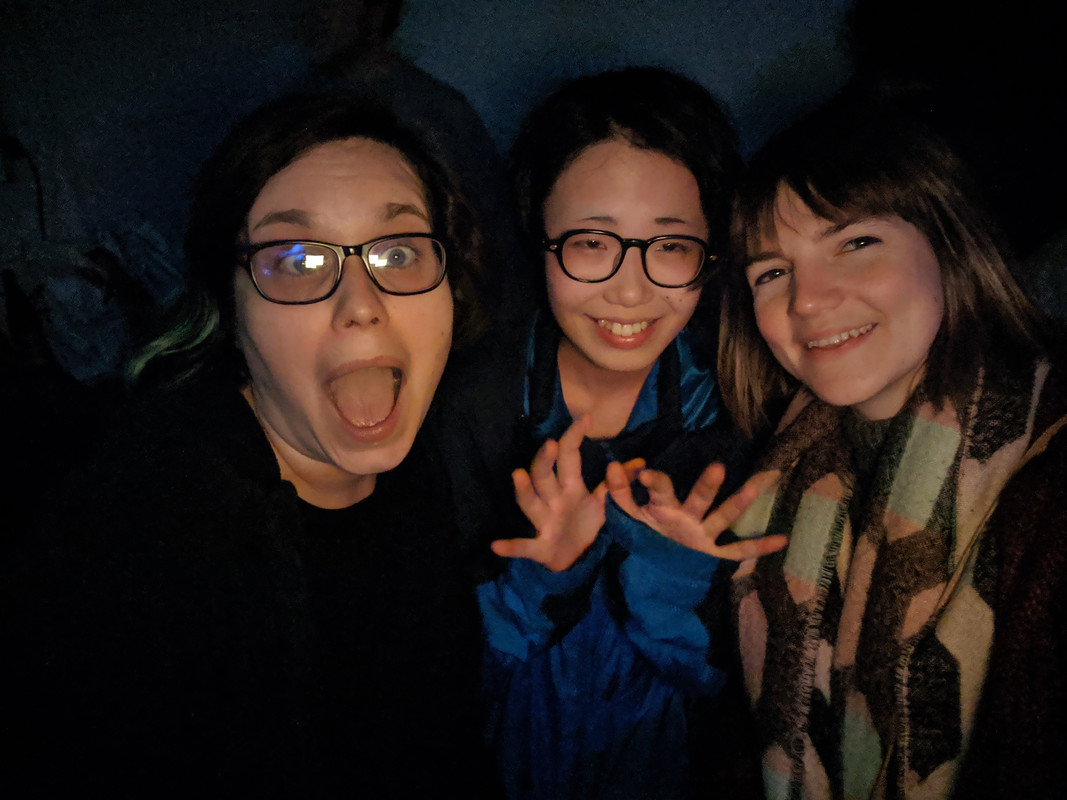 not gonna lie tho, organising the event was an incredibly stressful experience - while it was amazing to have the funding and support from the festival we ultimately massively underestimated how complex it is to run an event like this, and we all put in a lot of unpaid hours. basically i was only able to make this work as i was between jobs in april and not doing my 9-5. it’s really hammered home to me the importance of sustainability and how rare it is for event organisers to be able to work in a sustainable way. not sure how to achieve that tho. probably just have like 500 more conversations about it and not actually get anywhere lol.

no rest for the wicked though as the following weekend was algomech festival and characteristically i was running round like a headless chicken doing too many things:

i delivered a tidal workshop to an amazing group of people (some of whom had travelled a long way) who were all super engaged and peer-supportive! 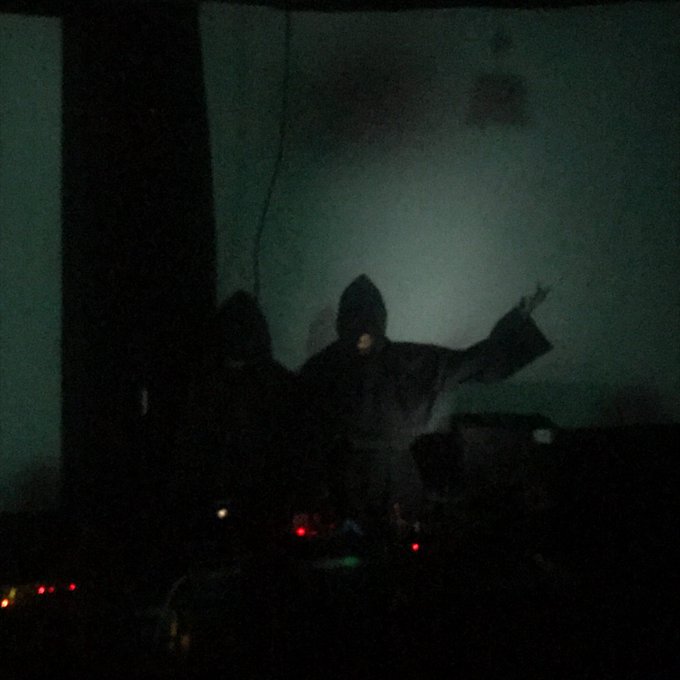 type also played using ryan’s super-cool new software polyglot. this was a bit of a stressful performance all round due to some technical issues during what felt like quite a high-pressure show, but i feel like we made it work even so. 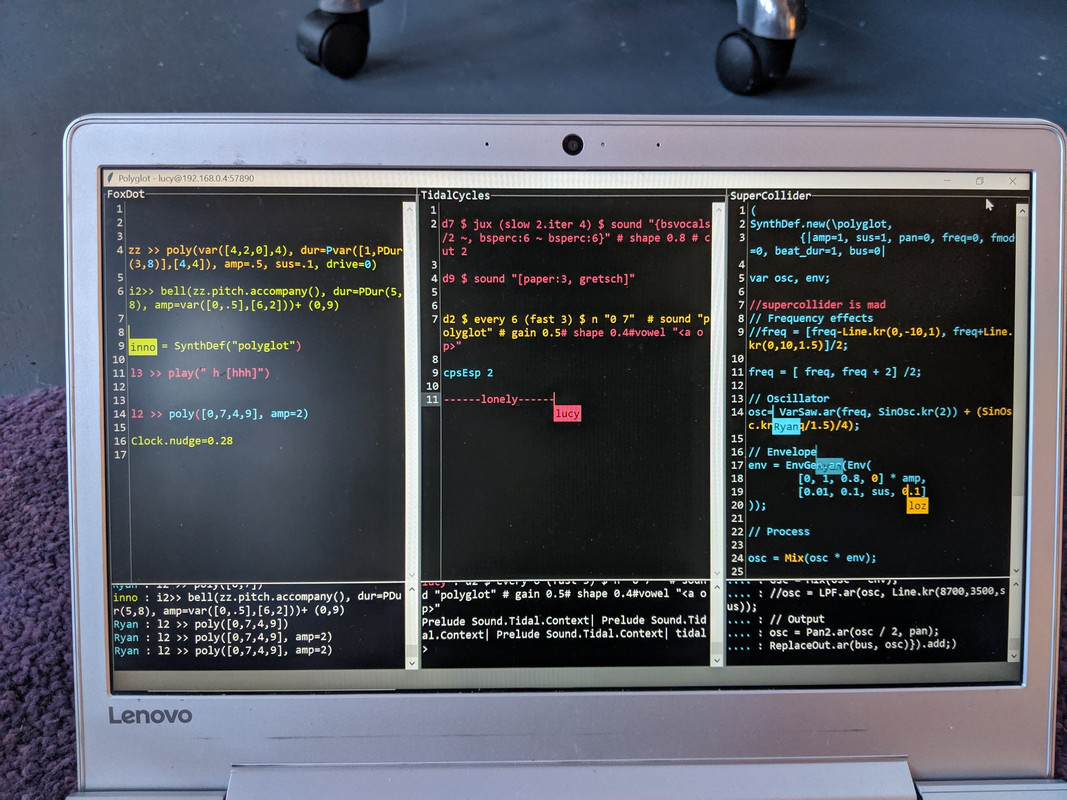 i produced an experimental reading of antigone - using metrical structures from the greek verse i composed a piece of music to accompany a chorus performance. this was a pretty weird but fun thing to do - again massive thanks to everyone who took part for properly getting into it and believing in my weird vision. i still don’t know if this was objectively good or not (although lots of people came and said they enjoyed it) as i just really don’t have a barometer for this sort of thing. it was stressful pulling it together but i really enjoyed the performance so i guess that’s a win. 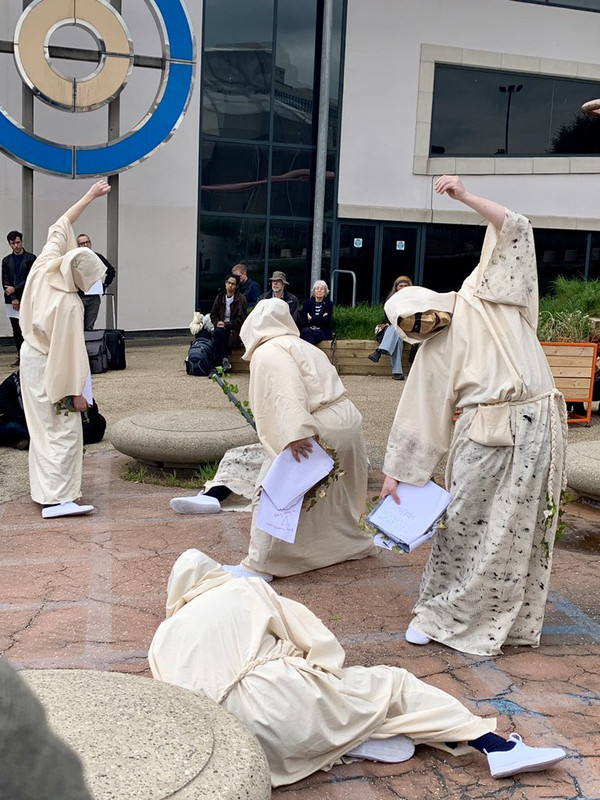 a few weeks later i zoomed off to orkney with deborah (and a few taggers on) to meet up with amy and reunite sona for our landmass project.

we hired a super-swag bus with tinted windows for the journey north (it’s a really long way!) and stopped off in stirling en-route. we were all super excited on the drive and it was a pretty comfortable and uneventful journey. 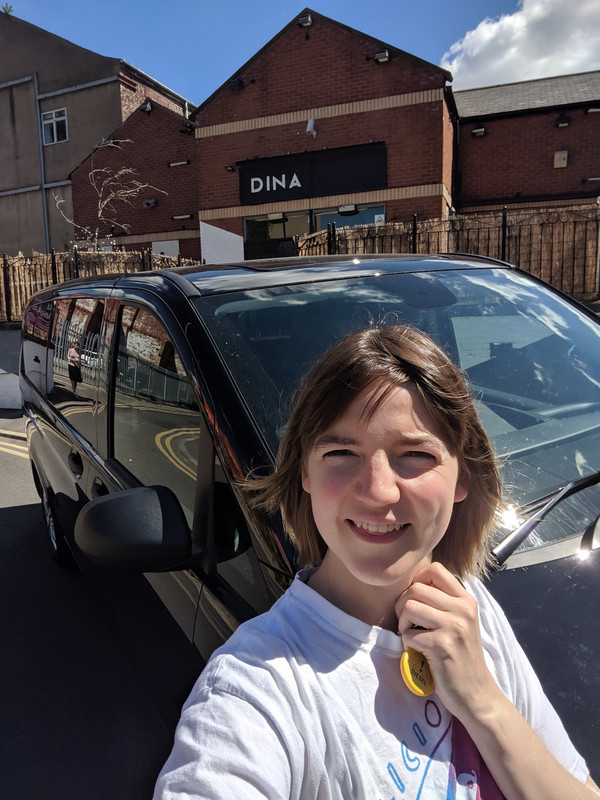 i don’t think any of us were really prepared for orkney though - so wild. i’m not really a wordsmith so not sure how i can do it justice. basically water everywhere, sky everywhere, monoliths everywhere, cows everywhere, art everywhere. just an amazing spirit and atmosphere of energy and renewal. 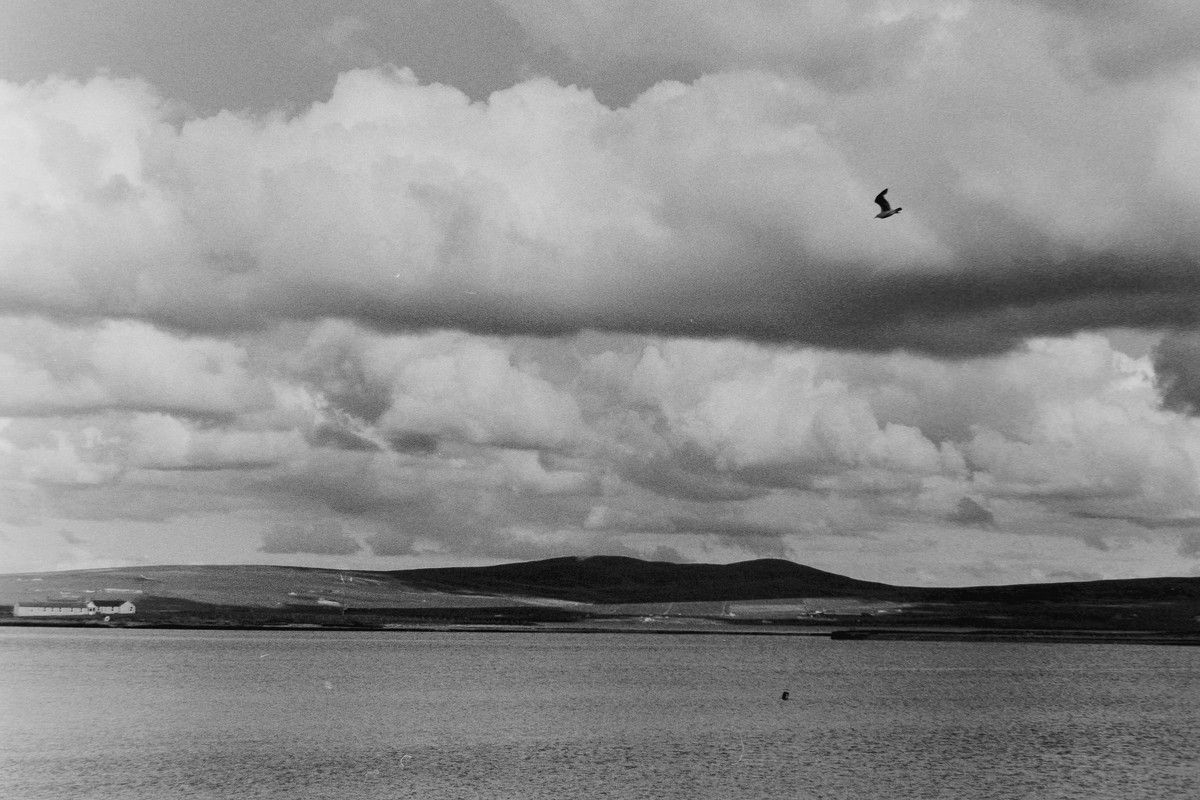 we had a whirlwind week taking in as many sights as possible (which was about 1% of all the things we wanted to do), taking and developing photos, recording sounds, visiting archives and not sleeping very much. on the last day we held an ‘open studio’ in the library in stromness to show our works in progress - photos, drawings, and some basic sonification turning our images into sound. loads of people came along and really got involved, trying out the sonification on their own drawings and generally being lovely and taking a lot of interest in what we were up to.

we even got our picture in the paper 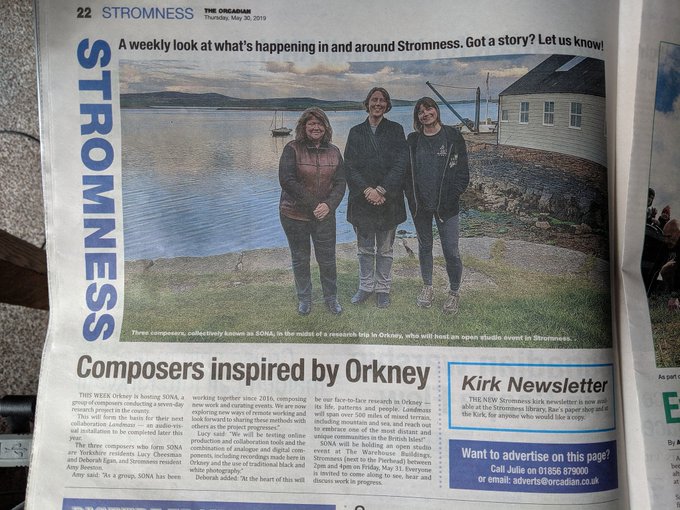 it was also so so so good to see amy, although it highlighted how much i miss having her round the corner it inspired me to be better at keeping in touch with (physically) distant friends.

we’re continuing to work on the project remotely working towards amy’s visit to sheffield in october which will see us installing and exhibiting the final piece.

i played two shows at hatch in june - one for plenty fuss supporting dorcha and the other for rowan with dbh and or sobre blau. both evenings were super fun (despite technical issues at the dorcha gig) but i particularly enjoyed playing for rowan. i’ve been working on some new sounds using more vocals (i’ve got a vocoder now which i can send an algorithmic midi pattern to as a carrier signal!) and synth stuff. i was pretty nervous but i think the show went well and i had loads of fun. 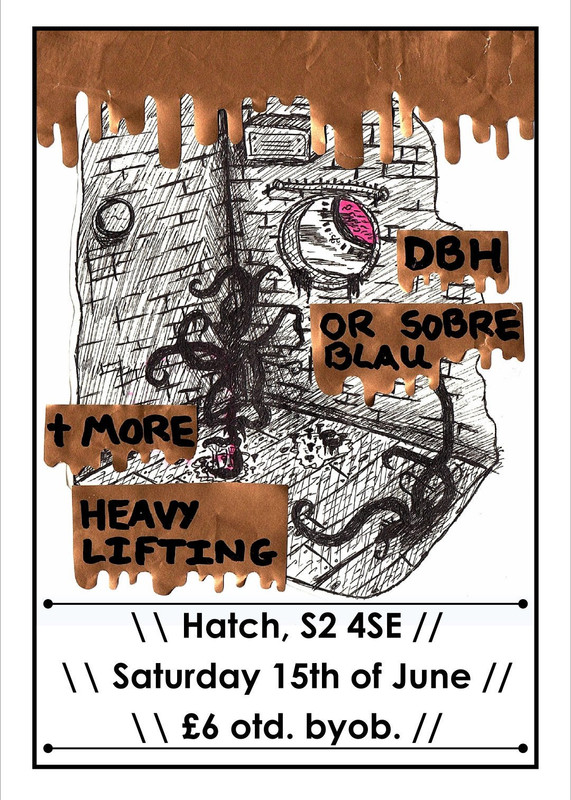 i really feel like the hatch folk have done a great job in re-energising ‘old audacious’. i love playing there - the very first thing i did when i lived in sheffield was go to a gig at audacious and i was so impressed/incredulous that such a space could even exist. over the years i’ve seen so many great shows there and met so many people there, it really has a special place in my heart. (they do need to sort the bogs out tho)

then i was off to london to teach a foxdot workshop at music hackspace - as ever shout out to harry for being an excellent organiser and host - always a pleasure! the workshop went pretty well (although i’ve not really taught foxdot before and i think i learnt as much as the participants) and my dad picked me up as usual which was great - if you’re reading this (think you are the only person who does), thanks dad!

the next day i played at corsica studios. can i just say first off this was a bit of a dream come true for me, having seen so many amazing shows at corsica it hardly felt real to be playing there myself. alex and harry did an amazing job of the organisation, everything was so slick and there was a great crowd. it was also really sweet that a bunch of my london pals came through <3 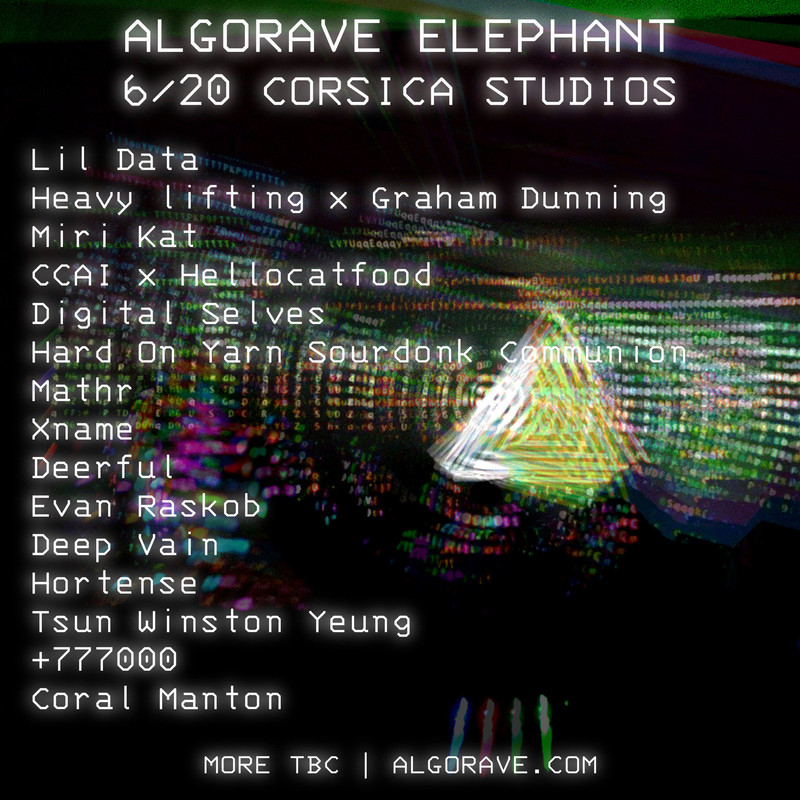 i played a collaborative set with graham dunning where we decided to restrict ourselves to 10 folders of samples each from our collections. this worked really well as an approach and it felt as though we were collaborating in a really genuine way rather than just playing side by side. graham also annotates his code which i’ve started to do now - feels like a nice way to engage with the audience and also really helped keep track of what was going on during a fairly hectic set. i had a lot of fun practicing and performing and hope we get the chance to play together again soon.

cheers graham for being a great collaborator & cheers alex for suggesting that we perform together.

i’ve been in the studio at tye die tapes the last few weekends recording my new album ‘thanks for watching’. i’m using loads of old hardware like dr groove, this kawai ‘pop synth module’, the final fantasy synth (thanks michael for letting me use it) and my trusty rocket. 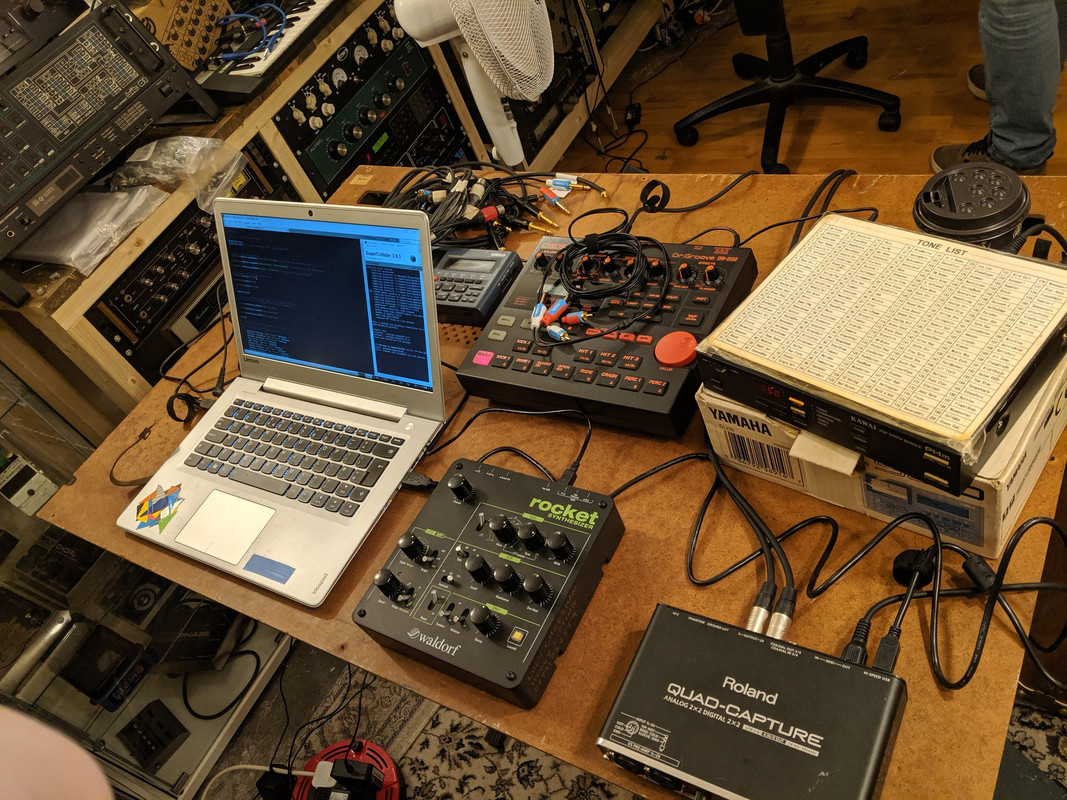 i’ve recorded like 5 hours of improv which we’re editing down into something more coherent. since i’m using a lot of hardware rather than samples this has worked out kinda differently to what i’ve done before as we’ve been able to record everything on different tracks which makes editing more flexible (but also much harder and more time consuming).

i’m super happy with what i’ve done so far and we’ve got rough edits for four of seven tracks. i’m going to add some overdubs and vocals which i did to an extent with mortal springs, although this is much more of a step away from a raw improv album. (and i’ve got no idea how i could play the tracks live, or if i even want to - problem for another day). but for the first time in my life i feel like i’m making the music that i hear in my head which is super satisfying.

it’s coming out on pan y rosas discos on 1st september, it’ll be free to download, but if you want to send me £££ i’ll have new shirts for sale on pickled discs around the same time.

i’ve got shows in coventry, copenhagen and sheffield in august, and i’m teaching at the live code summer school, and doing some workshops for diversity festival at the rotherham show. 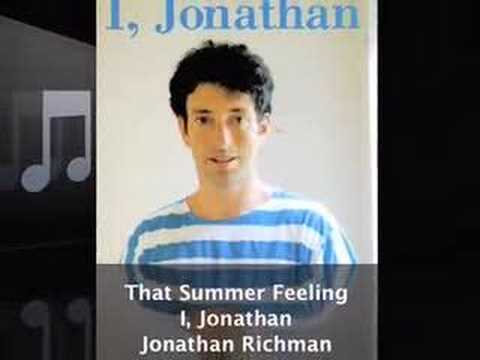